Along the Prime Path near the Power Tower, on the right when heading towards Big Innit Hotel and the Bee & Boo Inn. The exact coordinates are 265, -649.

The L'Manberg Embassy (also known as the TommyInnit Enterprise) is TommyInnit’s main base and, when L'Manberg was formed, became its Embassy. Dream SMP members were therefore welcome to enter, although L'Manberg laws supposedly applied on its land. It has been a key site in many conflicts, acting as the L’Manberg Embassy until Jschlatt banned Tommy from L’Manberg. Tommy later unofficially reclaimed the territory that his base was located in. After the Manberg vs Pogtopia War, Dream ignited a piece of TNT in front of the Embassy, blowing up the chest and the front of the building. The next day, Tommy then officially reclaimed the embassy and renovated it.

There is a bench outside it where Tommy and Tubbo traditionally sit down and listen to music discs while watching the sun set. Beside the base, there also used to be a dungeon with a zombie spawner, which has since been destroyed. Tommy first found Cat, the oldest of his important discs, from one of the chests in that dungeon.

There are many tunnels connected to this base as part of the sewer system, including an underground path to Tommy's Power Tower, a rail to TommyInnit's Holiday Home and an underground ice path leading to Dream's base that was used by Dream to get to and from Tommy’s base from his own at ease.

Although L'Manberg was blown up and dissolved, the embassy is still in stable condition. It is now simply used as a base for Tommy.

The building was originally named the Tommyinnit Enterprise, and acted as Tommy's primary base. It would be griefed several times due to wars and skirmishes, the most notable being The Disc Saga. During the Disc Saga, Tommy, Tubbo, and Sapnap fought and killed Dream in an underground ravine located near Tommy’s strip mine due to the fact that Tommy had hid one of his discs there. After Tommy moved the disc, Dream subsequently griefed the surrounding area of the base by digging up all the dirt in hopes of finding the disc and succeeded in doing so. To this day, most of the land remains griefed.

Time as a L'Manberg Embassy

The base remained the TommyInnit Enterprise until the secession of L’Manberg from the Dream SMP, when it became the L'Manberg embassy, making it technically part of L'Manberg. This was decided after Wilbur told Tommy that he needed to give something of his own up in order to prove that he cared about the revolution. Tommy ended up giving up his base, designating it as the L’Manberg embassy. However, he still lived in it. During the Dream Team SMP vs. L'Manberg War, Dream set off TNT when L'Manberg refused to surrender though it was subsequently repaired. Most of the events of The Railway Skirmish happened here as well.

During the Jschlatt Administration's time in power, the Embassy was disbanded and Tommy was forced out of his home due to being banished from the newly renamed Manberg. It is now mostly grieved, with Tommy’s bedroom being the only untouched area of the build. Karl Jacobs (after Tommy lava-casted his and Sapnap's honeymoon Eiffel Tower) griefed Tommy's house and left signs asking why Tommy griefed his Eiffel Tower. Tommy later reclaimed his base from Manberg, which had grown weak due to mass emigration. He fixed up parts of his base that had been griefed since the L’Manberg war, such as the underground area. After this, Tubbo, Fundy, and Awesamdude trapped Tommy's house as a prank on November 6th. Tommy fixed his base again and added an organized storage room in the underground area, noting that it had taken him 4 months to accomplish such a feat.

During the final minutes of the Manberg vs Pogtopia War, Dream placed TNT on the former embassy, blowing the entrance room up. The next day, it was re-instated as the L’Manberg Embassy by the new president, Tubbo. Tommy and Philza proceeded to renovate the building, making it look much better and more adequate in its entire lifetime, up to that point.

After Tommy removed many statues surrounding his base including Puffy's Turkey Statue, to see the sunset, Puffy decided to build a turkey statue above Embassy as retaliation. Connor (who was adding American flags all over the server) had also placed many flags on Tommy's house and removed the bench.

During Tommy's exile, Connor fully moved into the house, but was kicked out by Tommy to live in Ninja's house instead when he returned from his exile. In the week leading up to the Disc Confrontation, Tubbo moved into the house with Tommy, but later moved back out to live in Snowchester. After everyone thought Tommy died in prison Connor moved back in, only to be kicked out again when Tommy was revived and released.

The Power Room: leads from, War room to the Power tower 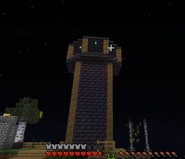 Evolution of the BSA 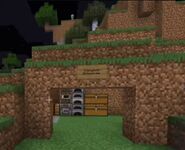 Tommy's dirt shack prior to its status as the L'Manberg Embassy

Renovated version of The L'Manberg Embassy during the Reconstruction Era

Vandalised version with granite instead of stone
Community content is available under CC-BY-SA unless otherwise noted.
Advertisement