The Dream SMP has many of BadBoyHalo's statues scattered throughout the lands.

The Dream statue was a floating wool statue of Dream holding a music disc next to the BSA L'Manberg Embassy. Karl repeatedly claimed that he had built the statue by placing a sign on the front. Tommy was unhappy that the statue was blocking the view of the sunset from his base, so he burned it down, while Karl attempted to stop him.

The duck statue, named "Bubbles", was built in place of the Dream statue after Tommy burnt it down. As a precaution after the fate of the Dream statue, Bad decided to make this statue and every future build out of concrete instead of wool. Tommy was still annoyed that the statue blocked the sunset, but allowed it to stay, as it wasn't a statue of Dream.

On the day of the Manberg vs Pogtopia War, the statue was damaged by Wilbur. Hours after the war had concluded, CaptainPuffy set up her residence inside the statue, repairing it and adding pink blushing cheeks to the duck. She also added glass "bubble" platforms beneath it in order to enter from the bottom.

Days later on November 20, 2020, Puffy made plans to move out of the statue. In addition, she redesigned the statue to look like a turkey statue with a top hat for American Thanksgiving. She also renamed the statue "Stuffing". She had plans to revert the changes to the statue after Thanksgiving and build a Christmas hat for the holiday season.

However, on November 22, 2020, Tommy and Fundy completely took down the turkey statue, for a similar reason to why the Dream statue was burnt down: it blocked Tommy's view of the sunset from his base. As retaliation, Puffy built a flat turkey statue on top of Tommy's base, The L'Manberg Embassy, and later on, she and Bad built another duck statue. However, instead of floating in the sky, the new duck statue was located in a pool of water below the location of the original statue. Puffy currently resides in this new statue as of November 25, 2020.

Eret commissioned Bad to build a statue of Fungi, Fundy and Niki's deceased fox, next to Fundy's Not So Secret Base after the Pet War had concluded.

Quackity and Karl commissioned Bad to build a Pokimane statue behind Party Island, intending to welcome her onto the SMP.

Puffy added a handlebar mustache to the statue, as part of a griefing spree with Dream on November 18, 2020. Karl removed the mustache a few days later.

The Eret statue was built on top of the entrance to Eret's castle after he had won the MrBeast Taco Bell gift card challenge on September 29, 2020. It featured Eret holding a rainbow flag, symbolizing Eret being LGBTQ.

Following Tommy's achievement of 2 million subscribers on YouTube, Bad built a statue of Tommy on top of the L'Manberg Embassy on October 21, 2020. The statue displayed Tommy holding a music disc, similar to the old Dream Statue.

It was taken down by Tommy and Philza on November 17, 2020, as part of an effort to make the embassy look better.

The Skeppy statue was built on top of Skeppy's Mansion as a gift for Skeppy after Bad felt guilty for trolling him in a past video. The statue was built off-stream on November 2, 2020, and featured Skeppy holding a rubber duck. Bad hid the statue by covering it in sand and trolled Skeppy by ordering him to gather random resources before he revealed it.

During the events of the Second Pet War, Sapnap destroyed the statue and used the concrete blocks to make a giant blue penis instead. A few days later, Bad took down the penis and rebuilt the statue in its original place, adding thick yellow eyebrows.

On November 18, 2020, Dream went on a pranking spree, blowing up the front of the statue in the process. As a result, the statue's face now looks like a butt.

On December 9, 2020, the Skeppy statue was relocated to Bad's statue room, where it was temporarily consumed by blood vines and then slightly broken down by Skeppy himself.

The BadBoyHalo statue was built in Bad's Statue Room by Skeppy as a gift after Badboyhalo got sick. It was built on December 15, 2020 right next to Skeppy's statue, and Skeppy later uploaded a video of him building it along with Badboyhalo's reaction on his second channel. To build it, Skeppy stole some colored concrete from L'Targay and the parking lot adjacent to it, and took down the original "stick figure" statue that was on top of Skeppy's mansion.

On November 25, 2020, while Karl was building the roller coaster for Party Park, Karl requested Bad to build a statue that the coaster could run through. Bad built a statue of Karl, holding a flower, similar to the Pokimane statue.

The Tubbo statue was built on December 9, 2020, in Logstedshire by Bad and Puffy as a gift to Tommy, while he was in exile. The statue displayed Tubbo holding the Your Tommy compass. However, Tommy, still angry at Tubbo for not showing up to his beach party, immediately took it down the day after. 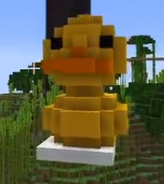 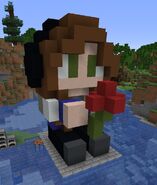 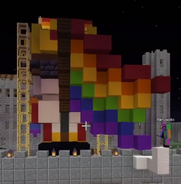 Eret Statue. The flag was later redesigned to be at more of an angle so Eret was more visible. 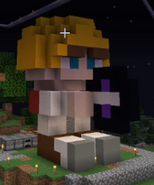 The Duck Statue, redesigned as a turkey statue for American Thanksgiving. 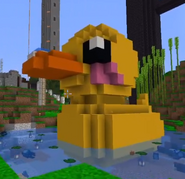 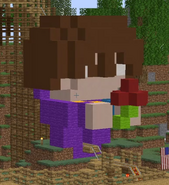 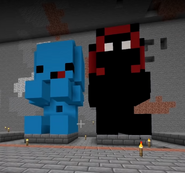