LazarBeam: We want to make a little retirement community here for us- Vikkstar: Yeah, yeah, just a nice little spot on the hill where we can just watch stuff go down.[1]

—LAZARBEAM AND VIKKSTAR TALKING ABOUT BOOMERVILLE

Boomerville was LazarBeam, Vikkstar123, and later HBomb94‘s territory located next to L'Manberg and Purpled’s Skull Cave. The founding members described the territory as a retirement home away from the young members with its members including some of the oldest (by age) of the server.

Unlike the rest of the server, the official religion of Boomerville is YouTube (rather than Church Prime).

Boomerville was finally abandoned when its last active member, HBomb, left Boomerville and the Greater Dream SMP to live in a far-away savannah.

Boomerville was founded on November 23, 2020 as a home for LazarBeam and Vikkstar. The two described it as a sanctuary away from all the "zoomers." The founding members decided that there was no need for government, as it was simply a retirement area.[2]

Upon joining the server, Lazar and Vik took the land that was planned to be the Slums District by L'Manberg. The members began to build their house on the plateau that overlooked the L'Manbergian Residential District, and the Tubbo Administration allowed Boomerville to claim control over L'Manberg-claimed land.

Following the building of the house, Lazar worked on building a giant melon farm. The farm provided food for the boomers and was considered sacred grounds to the members.[3] A giant cross built out of melon blocks overlooked the entire farm, symbolizing their respect for religion. The melons in this farm were only supposed to be harvested with a netherite silk touch axe dubbed the "Melon Harvester."

On December 5, 2020, HBomb joined Boomerville, purchasing a home right next to Vikkstar and LazarBeam's house for 32 diamonds.[4]

Later, Vikkstar and Lazar Beam were taken from Boomerville by Dream and Punz to test the Revival Book. Lazar and Vikkstar were eventually killed to maintain the secrecy of the book.[5] The last remaining active member, HBomb, left on January 19, 2021 to live a new life in a far-away savannah, making Boomerville an abandoned faction.[6] Some buildings such as the Boomerville church were eventually destroyed.[7]

Since Vik and Lazar streamed on YouTube, the two developed their own religion, simply naming it the religion of YouTube. Susan Wojcicki, CEO of YouTube, was made the head priest,[8] and PewDiePie was made the god.[9]

The Boomerville church was built by LazarBeam and Vikkstar just below their main house and above the melon farm built by LazarBeam for the newfound religion. The church featured a lava pool for a cleansing ritual, which was to be used after they sinned.[10] During the ritual, members were required to ask Susan for forgiveness and sacrifice themselves in lava to be reborn. This ritual was demonstrated after Vikkstar destroyed the sacred melon.[11] The residents of Boomerville also planned to build a YouTube monastery about 1,000 blocks away. LazarBeam started a path through the hill tops to the building point, but construction was not started before LazarBeam and Vikkstar went inactive on the server.[12]

The only members of the religion of YouTube were LazarBeam and Vikkstar, but they also discussed making Technoblade a member due to Technoblade also streaming on YouTube.

Boomerville is located on top of a hill that was formerly meant to be the Slums District of L'Manberg. It stands on a plateau overlooking L'Manberg. 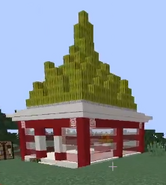