Dream Team Wiki
Register
Don't have an account?
Sign In
Advertisement
in: Articles in need of citation, Members, Dream,
and 7 more
English

This page is about the content creator. For their SMP character, see Dream/SMP.

Clay, better known online as Dream or DreamWasTaken and formerly DreamTraps and GameBreakersMC, is a member of the Dream Team, a group of YouTubers who make Minecraft content about plugins they've coded to change the game. He has the most subscribers out of the three members and has been active on his current channel on YouTube for the longest. He is known for popularizing Minecraft Manhunt and owns the private, whitelisted server Dream SMP.

Dream's first known YouTube upload was "sand trap or best trap ever!!!!!!," although the first video that he appears in is "Switcher Levitator Trap Tutorial" posted on August 26, 2013. Dream's YouTube channel was a slow-growing channel, stuck at around 1,000 subscribers from 2014 to 2019. His views rapidly increased in 2019 after he made a series trying to discover the world seed for PewDiePie's Minecraft world. After this, he continued creating content about custom plugins for the game that he had created, and making content with his friends. Through this, consistent uploading, and other tactics he researched before creating his recent content, he was able to master the algorithm and gain subscribers through his content.

After MCPvP died, Dream renamed his channel to GameBreakersMC where he would look at game exploits in servers like Mineplex. However, he didn't take it very seriously and renamed himself to Dream in May/June 2019, also deleting the videos.[Citation needed]

Dream's former username was DreamTraps, as shown by the link to his YouTube. He was able to grab the name Dream on Minecraft in February 2019, and thus, it became his name and branding.

Dream met Sapnap on MCPvP after Dream shared his Skype and asked if anyone wanted to be friends. Sapnap replied and said yes, and through this, the two became friends. When they met, Sapnap was twelve and Dream was thirteen.[3][4][5]

Dream met BadBoyHalo on MCPvP.[5][6] After MCPvP shut down, Bad invited Dream to be staff on his new server, MunchyMC. Dream is now a co-owner of the server, and owns Prison.[7]

In November 2020, Dream tweeted that his 1.16 speedrun that he submitted to speedrun.com two months prior to the tweet was still held under review due his insane ender pearl luck. Dream defended his run and accused the moderators of being biased against him.[9][10][11][12][13] On December 11, 2020, speedrun.com moderator Geosquare released a video in which he explained the statistics that the moderation team explored while reviewing the speedrun and their rationale for ruling the speedrun as unfair.[14] The moderation team also simultaneously published their paper of the investigation detailing the statistical analysis that proved Dream to be too lucky.[15] In response, Dream attempted to refute the the report and video with multiple (now-private) videos and an analysis written by an astrophysicist he hired from online service Photoexcitation.[16] However, many other professional speedrunners, mathematicians, and statisticians also weighed in, providing their own analysis that also went against Dream's refutations and analysis.[17][18][19][20][21] Months after the controversy died down, Dream admitted to accidentally cheating with a mod he unknowingly had enabled.[22][23]

Dream, upon the start of the 2020 Minecraft Mob Vote, urged his fans and followers to vote for the glow squid. After the results were shown and it was revealed that glow squid won, other voters criticized Dream for using his large platform to influence the vote. Following the initial announcement of the Minecraft 2021 Mob Vote, Dream poked fun at the incident before stating that he will not be asking his fans to vote for a mob.[24][25][26]

To see their history and involvement in the SMP, visit Dream/SMP.

In his now-deleted Speed Q&A, Dream said he isn't the most secure person with being on camera and had no plans to do face cams.[27] However, he later announced that he plans to reveal his face in 2022 when George moves to America.[28]

Dream has three siblings - an older sister, a younger sister (known publicly as Drista), and a younger brother.[29] Dream also has ADHD and didn't focus much in school - instead he drew and wrote his own stories and games that he wanted to create in the future.[30] Since 2021, he lives with his cat Patches and Sapnap.[31]

On June 23, 2021, Dream shared his boundaries through his merchandise Discord. They are featured in the following image, and the image can be downloaded and shared.

"Detective Dream", used in a stream

Ranbob (Tales from the SMP)

Francis (Tales from the SMP) / NotDream123 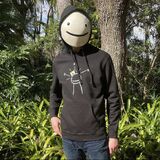 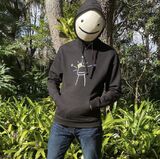 For a list of merchandise released by Dream, visit Dream/Merchandise.

For a list of videos from his main channel, visit Dream/Videos.