View source
Fiction notice:
All banter and fighting seen in streams/videos are purely fictional and should not be taken seriously. It is highly disrespectful to send hate towards anyone so please refrain from doing so at any point.

The Dream SMP (formerly known as the Dream Team SMP), is a private, whitelisted survival multiplayer (SMP) Minecraft server played on by the Dream Team and their friends. It is famous for being a roleplay themed server with a mostly improvisational plot and a long history of alliances, wars, factions, eras, and characters.

Livestreams, VODs, and server highlights can be found on Twitch and YouTube.

Listed below in order of their join date are links to articles about the content creators and their characters in the Dream SMP.

The SMP has many unique factions, which are bound together through their respective ideologies.

Tales From The SMP factions

In addition to factions, the SMP also has multiple alliances formed between members who share common interests.

The Dream SMP holds many important items, most of which are important to lore and hold plot significance.

The SMP also has many important books that have been written over its history. 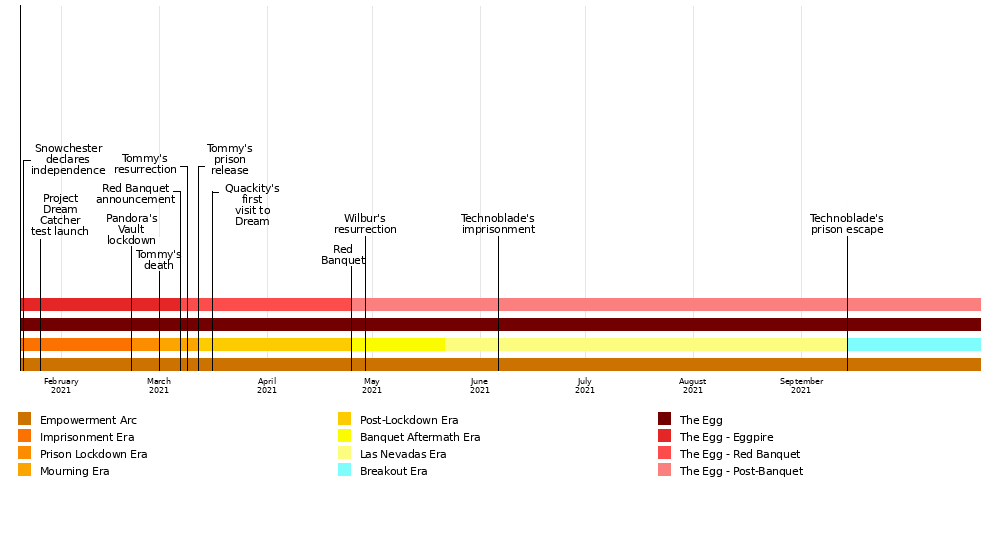 Events that have happened on the SMP sorted by timeline era.

Prior to the creation of L'Manberg, the storyline was not scripted. After L'Manberg's creation and to the current date, the Dream SMP is comprised of "scripted improvisation," where major plot points are pre-planned and the rest of the story improvised.[20][21]

Wilbur Soot was the head writer for the L'Manberg Independence Arc and the Manberg Rebellion Arc.[22] He also received help from others (particularly Dream, who served as a secondary story writer for the Pogtopia vs Manberg arc).[23] On November 16, 2020, after Wilbur's character officially died in the Manberg-Pogtopia War, Wilbur announced that he was stepping down to focus on personal projects.[24][25] However, he has implied that he may resume his role in the future.[26]

Although many plot points are scripted, sometimes they do not play out as planned and the creators improvise instead, as seen during the Manberg Festival.[27]

There were a lot of surprises and a lot of stuff changed as improv happened. One I'll give away was how Techno was NOT supposed to use a firework and murder Schlatt and Quackity in crossfire ahahah

Ended up being pretty cool though and we rolled with it

It depends person to person. Techno definitely wouldn't let me write him any differently but Tommy was pretty lenient in working alongside me as a character.

The three lives system did not exist during the L'Manberg Independence and Manberg Rebellion Arcs; Wilbur introduced it later on (after he had already stepped down as head writer).[29][30] Creators determine whether or not deaths are canon based on their relevance to the plot, and often joke about how canon unplanned or accidental deaths are. On December 4, 2020, Wilbur released a Reddit post with the number of lives every character had.[31]

Following Wilbur's announcement that he was stepping down from the head writer position, on December 3, 2020, Technoblade revealed on stream that he would be writing part of the script. Dream later clarified in a comment on TikTok that Techno was writing specifically for his character. Dream, Quackity, and Tommy would work on the major post-Manberg story arc, with input from Wilbur, Fundy, Tubbo, and other members.[32]

On January 30, 2021, Ranboo stated during a non-lore stream that each creator is writing their own character's main story. He also reconfirmed that the writing process was collaborative.[33]

On February 21, 2021, Dream stated on Twitter that he and Tommy were the ones who wrote about Tommy's current prison predicament, and have already fleshed out the plot.[34] Dream further talked about this on the Eboy's Podcast saying that some of the events were written months in advance, while others were almost a day before decision.[35]

Although the events and overarching story are planned out in advance, there are still mishaps and funny moments that come out of every event, which has lead to many memorable and funny bloopers.

Articles about the SMP

Since its sudden boom in popularity, several articles have been written about the Dream SMP by various publications.