View source
Fiction notice:
All banter and fighting seen in streams/videos are purely fictional and should not be taken seriously. It is highly disrespectful to send hate towards anyone so please refrain from doing so at any point.

South of Community House and North of Antfrost's animal sanctuary

Eret's castle, also known as the Gay Castle or the Pride Palace, is a build that exists within the Greater Dream SMP. It is a massive stone brick palace built and inhabited by Eret. The castle is decorated with rainbow windows, a giant rainbow flag, and a statue of Eret.

Part of the castle used to be "owned" by Fundy as he called himself "king." This was apparently considered legal because of "Dutch Laws", however it didn't last long since Eret quickly kicked him out of the castle.

As part of a prank war between Fundy and Eret, Fundy decided to do a wholesome prank and covered the windows of a castle with rainbows. Eret was happy with it, and in return, Eret had a Fundy statue built in front of his base.

To honor him winning the $10,000 Taco Bell Gift Card, BadBoyHalo built an Eret statue at the entrance overlooking the land.

Puffy gave Eret a combined "prank" and "gift" in the form of a massive sheep with a crown statue in front of the front gate of his castle.

After George was stripped of kingship, and Eret being reinstated as king, he was given back full ownership of his castle. The peace did not last for long, as it was griefed by Quackity, Sapnap and Karl as part of a failed coup; his castle was quickly repaired by them in the aftermath.

On January 19, 2021, HBomb left his residence in Eret's castle, planning to start anew somewhere else. This came after Tommy accidentally mistook his stuff for Eret's things, as HBomb had previously lived in Eret's castle.

During a clean-up stream on the SMP, Foolish and Tubbo planned to destroy the front gate of the castle. In the end, they decided against it, instead destroying the bridge connecting the two towers. later the bridge was restored but with an different look. 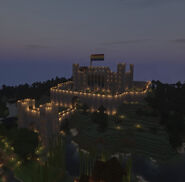 Eret's castle with shaders at night 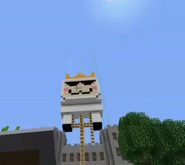 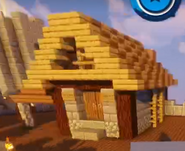 house on the roof of the castle 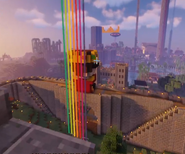