This page is about the content creator. For their SMP character, see GeorgeNotFound/SMP.

George Davidson, better known online as GeorgeNotFound and occasionally Gogy, is a member of the Dream Team, having the second most subscribers out of the three. He has been uploading current YouTube videos publicly since 2019, but has been on the platform since 2013.

George is a co-founder of the Dream SMP, along with Dream.

George's original username before he started making videos with Dream was GeorgeeeHD.

The origin of GeorgeNotFound was first explained on his livestream on June 13, 2020. In the stream, he said that Dream came up with the idea; Since he is a coder, the "not found" part came from when websites have a "404 not found" warning. Dream wanted to keep George as a part of his username as well.[2]

George and Dream met on MunchyMC, BadBoyHalo's Minecraft server.[3] Dream was an admin and developer, and George was a coder. Their first interaction was when Dream asked George for help on coding a plugin, but after getting ignored, Dream decided to learn how to code it himself, which kickstarted him becoming an even better coder.[4]

During George's stream on June 22, 2020, when asked how George met Sapnap, he said that he may have met him through a Minecraft server. However, he walked back on the statement to say that Dream most likely introduced the two, as Dream and Sapnap had met first, but he was not entirely sure.[3]

George had a cat named Luca that he got in October 2019 who passed away in July 2020 due to an untreatable heart disease.[5] He didn't publicly release the name of Luca until after his passing. Luca was given the nicknames Cat, Robert, and Baby by fans before Luca's name was revealed.

He now has a dog that he got in August of 2020.[6] Her name has not been released. She is a Hungarian Vizsla.

On October 17, 2020, Dream posted a picture of George’s new kitten, taken a few days previous to the tweet.[7] Their name has not been released as well. George often posts pictures with them, and they've been featured in his Twitch livestreams.

To see their history and involvement in the SMP, visit GeorgeNotFound/SMP.

To see their participation history in the Minecraft Championships, visit MC Championship.

Miles Memington (Tales from the SMP)

Greg (Tales from the SMP)

For the main gallery of images of George, visit GeorgeNotFound gallery.

Wilbur Soot and TommyInnit meeting up with George 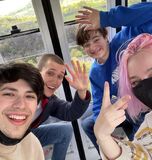 For a full list of videos on his channel all with their own pages, visit GeorgeNotFound videos.