View source
watch 02:56
Raise a Floppa - The Loop
Do you like this video?
Play Sound
Fiction notice:
All banter and fighting seen in streams/videos are purely fictional and should not be taken seriously. It is highly disrespectful to send hate towards anyone so please refrain from doing so at any point.

Drista (High Judge of the country and owner of Party Island)

—KARL AND SAPNAP ANNOUNCING THE NAME OF THE NATION[3]

Kinoko Kingdom is a nation formed by Karl Jacobs as a safe space from any drama in the Dream SMP. The nation resides south of spawn.

After learning about the necessity to protect his library, Karl started the process of relocating the library with Sapnap and George on February 9, 2021.[4] The trio first decided to dissolve El Rapids as it had become a stagnating nation. After finding a location for the library, Karl decided to form a new nation with his friends, who had all previously been part of El Rapids. Karl also developed the only rule of the nation: Do not pick flowers. If flowers are picked, they would have to be replaced.[5] Karl travels back to his library after almost every Tales from the SMP episode.

Karl, Sapnap and others placed several posters around the server to join Kinoko Kingdom later on. This was an attempt to become the most famous nation on the server, as Karl wanted more friends.

Karl, during touring Lil Nas X, recommended that they should build a treehouse. They did so, and placed some paintings of Lil Nas X himself inside.

Foolish Gamers, after noticing the place had been somewhat inactive, built several structures and did some terraforming in Kinoko Kingdom. He first started to build a mushroom tower off-stream, and later went on to build two houses. He also built a dojo with a fountain directly outside of it, a dragon statue, and a castle. All of the builds have been built directly above Nihachu's underground city, causing him to accidentally dig into underground parts many times.

Later, while Drista was playing on Sapnap's account, Karl got her to join Kinoko Kingdom as the High Judge who would be responsible for punishing criminals. He also gave her ownership of Party Island and Lil Nas X's tree house. They then went around, "claiming" property in the Dream SMP.[7]

Sapnap, while speaking with Tommy, would take him to Kinoko Kingdom, however, when Tommy began claiming the property as his, Sapnap armed himself with Tommy's netherite and bow, asking him to leave and not come back.

In the fourth Las Nevadas lore stream, Sapnap convinced Quackity to visit Kinoko Kingdom and gave him a brief tour, but eventually came into conflict with Karl as he didn't recall anything about Quackity other than being allegedly his murderer. The argument escalated until Quackity swore to never return and Karl threatened military action against Quackity, essentially banning each other from their respective countries and placing restraining orders against each other.[8]

Instead of having a military, Kinoko has Sapnap as head of Militia, meaning that of war were to break out then Sapnap would likely be leading Kinoko and it’s citizens to battle,

Some of the buildings in Kinoko Kingdom 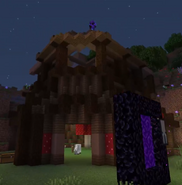 Karl's library next to the Kinoko portal 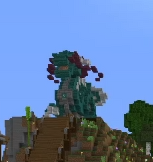 An example of a fountain

An example of a small house 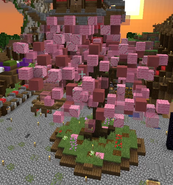 An example of a tree 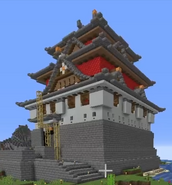 The road of Kinoko Kingdom.