In front of The White House

The L'Manberg Podium was a pavilion that sat directly in front of the White House, and was to the left of what was previously L'Manberg, and currently Manberg territory. It was created for the first L'Manbergian Election, and was used several times for speeches, announcements, and other official gatherings on the server.

It was destroyed on November 16, 2020, during the Manberg vs Pogtopia War, and was subsequently replaced by the L'Manberg Multipurpose Podium and Stage.

The original podium was built by Karl and Fundy[1] for the first L'Manbergian Election and has been used several times for speeches and other official gatherings on the server.

In the aftermath of the L'Manbergian Election, as The Manberg Rebellion was coming to a pause for the night, Eret began to burn down the podium. Eret did this in the mindset of respecting the true history of the newly named Manberg. It is unknown as of this time how much of the podium survived the fire.

After, Quackity built a fountain out of netherrack in its place that he said represented what Manberg was back when it was L’Manberg, seeing as the fountain was very ugly.

Fundy reconstructed the podium with blackstone bricks on October 12, 2020, for the Manberg Festival. He also added a black throne for Schlatt to sit on during his speeches.

The podium was destroyed during the Manberg vs Pogtopia War. 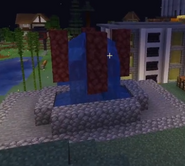