Burned down by Nihachu during the Doomsday War (January 6, 2021)

Near the entrance to L'Manberg/Manberg

L'Mantree was the allegedly last naturally-generated tree remaining from before the L'Manbergian War for Independence within the borders of the nation. It was established by Wilbur Soot among the members of Pogtopia shortly before the Manberg vs Pogtopia War. Though it survived multiple terrorist efforts, it was ultimately burned down by Nihachu during the Doomsday War.

It was located thanks to a set of pictures taken by Eret, showing off the world seed. Though the majority of the other natural trees had been destroyed, L'Mantree remained untouched.

However, it was later discovered by fans that the L'Mantree was likely actually a tree planted by Jschlatt after winning the election, rather than a tree from before the L'Manberg War.[1][2]

L'Mantree was a political symbol, representing the enduring spirit and freedom of the country it represented.

Due to the Dream Team burning down the forest surrounding L'Manberg during the War for L'Manberg, and detonating the entire country, many of the trees were lost/burnt or cut down. However, one tree managed to evade destruction.

On November 6, 2020, upon its discovery, Wilbur formally established the L'Mantree, giving it its name. He, along with other members of Pogtopia, has vowed not to blow it up in the upcoming war - it should be noted that at this point in time, Wilbur's final phase of his detonation plan was already fully underway. Dream suggested creating an obsidian barrier around it to protect the tree from any future destruction, and Tommy properly did so right before the start of the Manberg-Pogtopia War.

While placing the obsidian around it, Tommy and Wilbur jokingly decided that L'Mantree was an acronym. Tommy declared that it stood for Luxurious' Man Amen No TommyInnit Really good E E.

Karl broke a few leaves on November 22, 2020, not knowing of its significance. Tommy and Fundy were angered upon discovering the damage, forcing Karl to stop and repair the damage done.

On November 27, 2020, Tubbo and Philza discovered the tree stripped of its leaves, alongside threats to burn it down if fixed. The culprit remains unknown, and the threats were ultimately disregarded, as Philza willingly restored the tree to its former glory. He kept photos of the tree on hand, in case of future terrorist efforts.

In the days leading up to the Doomsday War, Nihachu came to terms with her terrible treatment in L'Manberg, where her ideas were ignored, she was pushed aside, and no one offered her any aid or support after Manburg took all of her property, despite her status as a loyal and devoted patriot since its independence. She came to the conclusion that the ideals that L'Manberg once embodied truly no longer existed in the nation, and it had fallen victim to corruption and complacency a long time ago.

As a direct result of her shift in ideology, during the Doomsday War, Niki burned the tree down with a flint and steel, saluting its burning remains. As she watched the tree burn, she recited the infamous line of betrayal once coined by Eret - "It was never meant to be". 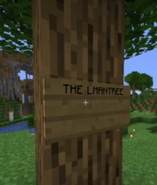 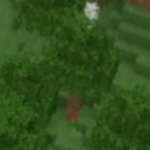 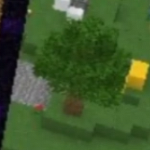 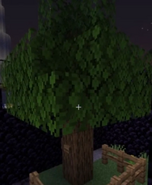 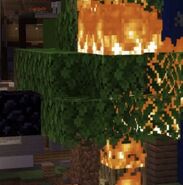