This page is about the content creator. For their SMP character, see LazarBeam/SMP.

Lannan Nevile Eacott, better known online as LazarBeam, is an Australian gaming YouTuber who was invited to join the Dream SMP on November 22, 2020 alongside Vikkstar123.[3]

To see their history and involvement in the SMP, visit LazarBeam/SMP.

Bob (Tales from the SMP) 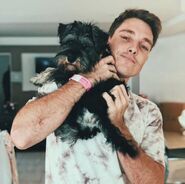 Lazar and his Dog Willeh