View source
watch 02:58
No Man's Sky Update - The Loop
Do you like this video?
Play Sound
Fiction notice:
All banter and fighting seen in streams/videos are purely fictional and should not be taken seriously. It is highly disrespectful to send hate towards anyone so please refrain from doing so at any point.

Content warning:
This page/section describes topics that may be uncomfortable or upsetting to some readers. Readers' discretion is advised. Avoid this page/section if you are sensitive to topics of death, execution, or manipulation.

The Manberg Festival, also referred to as The Red Festival[4], was an event in Manberg hosted by Jschlatt, Quackity, Tubbo, and Fundy to "celebrate democracy and Manberg." However, despite Schlatt framing it as a celebration of democracy, the event spiraled into chaos after Tubbo was exposed by as a traitor and publicly executed. In response to the events, many people began to reconsider their thoughts about Manberg and Schlatt as a whole, including internal members of Manberg who became divided over the nation's leadership.

On October 8, 2020, Schlatt gave a decree that there would be a festival held in Manberg in a week's time. Schlatt wanted it to be a party based on the celebration of democracy and Manberg with many minigames and drinking games. Everyone on the server except TommyInnit and Wilbur Soot were invited to the event.[5]

Tubbo was first given a big speech for the event. Later, he was given the responsibility of festival planner after he impressed Schlatt with the bunker and his lie about farming totems of undying.

Fundy was first given the task of rebuilding the Manberg Podium, and later given the task of security for the event and for Schlatt and Quackity. Tubbo and Karl added to the event by creating shops, a boxing ring, an ice ring, and a wipeout parkour course.

Following the announcement, Schlatt mentioned that he had many building projects planned for Manberg, and that he'll reveal them in his speech during the festival.

Following the announcement of the festival, Wilbur created a plot to bomb the festival by planting TNT throughout Manberg since he was angered over losing his power after the election. Wilbur requested a meeting with Dream, and Dream provided Wilbur with TNT. After the transaction was done and the two had their conversation, Wilbur warned Dream to not be anywhere near Manberg when Tubbo was giving his speech. Tommy attempted to persuade Wilbur to not blow up Manberg, but Wilbur persisted with his plan. Prior to the event, Wilbur spoke with Tubbo, advising him to add a code-word to his speech and telling him to run after saying the words.

Prior to the event, Schlatt, Tubbo, and Quackity inspected the decorations and did final preparations.[6][7][8] During all of this, Tommy and Wilbur met with Technoblade, snuck into the country, and reconned the country, spying on the three.[9][10] Tensions arose between Tommy and Wilbur whilst they tried to find a place to observe; Tommy attempted to convince Wilbur to call off the TNT plot much to the others disgust. Tommy gave Wilbur a cake Niki made and Wilbur accused him of trying to guilt Wilbur into submission, before announcing that he didn't care. The two then moved to watch from the roof of a nearby building. The invited attendees met at Ponk's Drop The Man Minigame and started the celebrations.[11]

The attendees attempted to dunk Ponk, Nihachu, and Technoblade. Ponk and Niki both died by drowning in the tank, but Technoblade, who had brought full netherite gear with respiration and protection four, survived for several minutes before getting out with his trident much to the dismay of Fundy. After the games, the crowd was called to the podium by Schlatt for a speech and the formal announcement for the beginning of festivities.

After Schlatt announced the official beginning of the event and gave a speech, the attendees arrived at the boxing ring. The first match was between Fundy and Technoblade. Much to Technoblade's dismay, the fight was a boxing match that stated that no weapons and armor were allowed. Technoblade used his trident to fly away and secretly drank a strength potion. After flying back to the boxing ring and making a stylish entrance, Technoblade took off all his armor and prepared to fight. Strafing and killing Fundy in four hits, Technoblade gloated and celebrated.

The audience became suspicious of Technoblade's abnormal, quick victory, and Quackity asked Technoblade for a drug test. However, the request was brushed off.

The second round was held between Tubbo and Quackity. The duel stretched on, but eventually Tubbo took victory. The third round was between Schlatt and Fundy, and Schlatt cheated more than Technoblade. Once the match began, he donned his armor and pulled out his "gun" (bow) to shoot Fundy to death.

Whilst this was happening, Niki went on a walk and saw Tommy and Wilbur sneaking in. She chose to stay silent and quickly returned to observe the boxing.

After the games, Schlatt called everyone back to the podium. The attendees took their seats with Tommy and Wilbur watching from the LMFAO building.[12][13] Schlatt then told Tubbo to stand in the throne for Tubbo to begin his speech. Tubbo began his speech, which was a speech about democracy, the exile of the TommyInnit and Wilbur Soot, and being thankful for the uprising of Manberg. Despite the fact that he was constantly interrupted by Jschlatt and Quackity, Tubbo excitingly gave his speech.

Immediately after Tubbo's speech, Schlatt returned to the microphone and encased Tubbo in yellow concrete with help from Quackity. Schlatt announced to the audience that Tubbo was a traitor to Manberg. Schlatt invited Techno up to the podium and asked him to "take care of him". Techno tried to stall for time, hoping to receive any direction or guidance from Wilbur or Tommy, but no such guidance came. Schlatt then demanded that Tubbo was to be executed immediately to the shock and horror of the audience. Technoblade panicked as he was being "peer pressured" into killing Tubbo. After much deliberation and stalling, he fired on Tubbo with his multi-shot firework crossbow, missing once, but instantaneously killing Tubbo, Schlatt, and Quackity with the explosion of the second shot.

Astounded by the lethal capabilities of his new weapon, Techno then turned and fired into the unsuspecting crowd multiple times, killing Schlatt again and four other attendees. Some members of the audience were able to escape the killing, running away immediately after the death on the podium. In the ensuing chaos, Tommy pearled onto the podium behind Techno. Technoblade immediately fled the scene with his trident and met with Wilbur at the LMFAO. Tommy, left alone, was attacked by surviving attendees and Quackity. He managed to kill Ponk and Quackity, but was killed by Purpled, losing many items including "DEFINITELY NOT PENIS". Wilbur had attempted to find the button to blow up Manberg as well, but failed to locate the button. Tommy eventually respawned in Eret's tower, but traveled to Pogtopia to gather supplies and meet Tubbo in his bunker.

After the chaos, Schlatt told everyone to return to their seats and continued his own speech. Niki refused to sit and started shouting at Schlatt so he ordered her exile. After more pushback from Niki, he ordered her execution. Wilbur then intervened, walking in front of Niki and in the middle of the audience. Wilbur, defended by Technoblade, made his own speech at Schlatt before telling Niki to run. Schlatt ordered everyone to 'Start taking shots' and so everyone in the audience gave chase, leading Wilbur, Technoblade, and Niki to flee to Pogtopia, though Niki was killed by Ponk in the chaos. There, Tommy and Wilbur invited her to live in Pogtopia.

The Manberg Festival revealed Schlatt's true intentions, leading to BadBoyHalo, Antfrost, and Awesamdude's formation of the Badlands. In addition, Schlatt's new plan of taking down the White House caused more divide between him and Quackity, which would eventually lead Quackity to step down from Vice President.

Technoblade's execution of Tubbo had led to distrust between Tommy and Technoblade. Upon regrouping at Pogtopia, Tommy accused Techno of betraying Pogtopia, but Techno defended himself by citing the peer pressure. To resolve their dispute, Wilbur suggested that they hold a fist fight. In the end, Technoblade won, but Tommy still refused to accept Techno's rationale for his actions. Niki and Tubbo secretly told each other that they both believed Wilbur was crazy.

Niki, Tommy and Tubbo went outside to watch the sunset and played a jukebox. They created a sub-faction between the three of them agreeing to stick together no matter what before silently watching the sun go down to C418 - Blocks.

The audience at the podium

The Underground Prime Path, used to traverse between Pogtopia and Manberg by Tommy and Wilbur during the event. 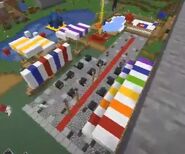