The topic of this page has a wiki of its own: the MrBeast Wiki.

Jimmy Donaldson, better known online as MrBeast, is a famous YouTuber who is a close friend of the Dream Team. MrBeast often features Dream in videos on his gaming channel, MrBeast Gaming. On his main channel, MrBeast, he is known to give away prizes and money to random people and makes challenges with him, his friends, or other people in which the winner wins a large sum of money or a prize.

MrBeast was believed to have been whitelisted on the Dream SMP on September 29, 2020 to hide a $10,000 Taco Bell gift card.[2] Upon the discovery of the prize, Dream disclosed that it was actually him with Jimmy's skin who hid it, with Jimmy telling him the coordinates to place it. It was later confirmed that Jimmy's Minecraft account is whitelisted on the server when he logged in on December 27, 2020 to hide over $100,000 in gift cards.[3]

MrBeast is also known to do collaborations with the members of the SMP, playing Among Us with Dream, George, Sapnap, and BadBoyHalo, Minecraft with TommyInnit and Purpled, and inviting Quackity to host a challenge. He was also a judge alongside Dream on a Minecraft's Got Talent show hosted by Quackity. 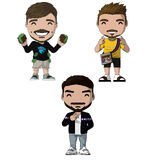