Punz's House is one of the historical landmarks of the server. The house is built of dark oak, and a wall separates his massive backyard from the rest of the land. The house features a glass roof and many beehives for beekeeping. His yard also features a tower that has floors rented out to various members on the server.

On September 23, 2020, after Punz refused to return Sapnap's items and play Hide and Seek with him, Antfrost, BadBoyHalo, Eret, and Karl, Sapnap attempted to burn down the house. As a result, Punz's bees died, and the house was flooded with water in an attempt to prevent fire spread. After the incident, Punz cleaned up the mess and patched his house up.

Punz's yard is a large section of land sectioned off from the rest of the land around it with walls. It features a tower where he rents rooms out.

After the Manberg vs Pogtopia War, Punz started decorating the yard as Christmas is around the corner. Punz built a Christmas tree, a candy cane path, and a snowy area for his new polar bear to live in. He also built a stable for his new horse and a pond for his new fish.

Punz's top floor, where he keeps many beehives. 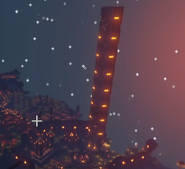