The SWAG2020 vs POG2020 Election, officially known as the First L'Manberg Election, was a presidential election in L'Manberg held between September 8, 2020 and September 22, 2020.

After L'Manberg won its independence from the Dream SMP, Wilbur Soot established the country's government as an autocratic regime with himself as the nation's president and TommyInnit as vice president. Over time, however, it became clear that the citizens of L'Manberg weren't taking Wilbur's orders as president seriously.

Wilbur sought to fix this issue by legitimizing his claim to power through an election, and planned to host a one-party election where L'Manbergian citizens would have to vote for his and Tommy's party. However, Quackity, a L'Manberg outsider, formed an opposing party with GeorgeNotFound as his running mate. Since L'Manberg's government remained autocratic, the election was crucial in deciding the direction the country would take in the future.[1]

On September 8, 2020, the two parties POG2020 and SWAG2020 hosted a presidential and vice presidential debate in the sky courthouse with Tubbo and Karl Jacobs presiding over the debate. The two parties argued over policies crucial to L'Manberg, including allowing other citizens into L'Manberg, solving conflict within the nation and with the Greater Dream SMP, and corruption within the government. The debate quickly broke down after bribery allegations, yelling, and killing within the courthouse.[8][9][10]

On September 20, 2020,[11][12] a rally and debate took place at the L'Manberg Podium. Wilbur, Tommy, and Quackity took turns giving speeches and answering questions from people who had assembled to listen. George did not show up to the debate, causing Quackity to panic.

Before POG2020 or SWAG2020 spoke, Fundy and Niki Nihachu took the stage to announce the campaign of Coconut2020, which became very popular with the audience. When asked to present their endorsements, however, Fundy and Niki logged off.

SWAG2020 then took the stage. Quackity brought forward KSI as an endorsement, although this was never confirmed.

POG2020 took the stage. Tommy brought forward an endorsement from Vikkstar, who had created a video called "Endorsement" that was played on stream.[3] Wilbur then brought forward the party's second endorsement, Jschlatt. This surprised the viewers, as Schlatt had previously been banned from the server.[4]

Schlatt, who acted as a senile old man, immediately derailed the endorsement. He denounced the democratic process, insulted the POG2020 and SWAG2020 parties, and endorsed Coconut2020 before withdrawing his endorsement and creating his own party, SCHLATT2020. Dream immediately endorsed him.

After his endorsement, Dream helped Schlatt chase down and kill Quackity, Wilbur, and Tommy. While running from their pursuers through underground tunnels, Wilbur proposed a compromise with Quackity and asked if he wanted to combine their two parties into SWOG2020. Quackity considered this proposal, but denied it because it was conditional and did not guarantee a position of power. He then created a coalition party between SWAG2020 and SCHLATT2020, called SchWAG2020.

Wilbur and Tommy accepted defeat after being killed by Schlatt, Quackity, and Dream, logging out. Wilbur then read the Declaration of Independance to Tommy.

At the very end of the night, CallMeCarson endorsed SWAG2020.

The election results were announced on the September 22, 2020 at the L'Manberg Podium by Wilbur. In total, around 220,000 legitimate votes were cast through a Google form sent from Wilbur's Twitter account.[13]

POG2020 appeared to be the winners, with 45% of the popular vote. However, due to SWAG2020 and SCHLATT2020's coalition government, their votes were combined, giving them 46% of the popular vote and handing Schlatt the victory. Schlatt became the president with Quackity as the vice president, and immediately gave his first speech.

Well, that was pretty easy. And you know what I said the day that I got unbanned from the Dream SMP and the day I said I was running? An election that I won, by the way. I said, 'Things are going to change.' I looked every citizen of L'Manberg in the eyes and I said, 'You listen to me: This place will be a lot different tomorrow.' Let's start making it happen. My first decree as the president of L'Manberg - the EMPEROR of this great country - is to REVOKE the citizenship of Wilbur Soot and TommyInnit! Get them out of here! Get them out of here! You're no longer welcome!

Quackity and GeorgeNotFound shoot at the retreating men with arrows while Nihachu cries out in protest. Schlatt begins laughing.


Oh, that was so easy! Until further notice, Wilbur Soot and TommyInnit are merely a memory of L'Manberg. A relic of the past. A reminder of the darkest era this country has ever seen. And I guarantee you all, dear citizens... Tonight, that changes. We are entering into a new period of L'Manberg, a period of prosperity! Of strength! Of unity!

Schlatt's first decree was to revoke the citizenship of Wilbur and Tommy. He then lowered taxes (despite L'Manberg not having any) and filled all the fountains with Hawaiian Punch. He made Tubbo the Secretary of State, much to Tubbo's confusion, and demanded that Tubbo hunt down Wilbur and Tommy. He made George a member of his cabinet as well. Finally, he raised taxes on the women of L'Manberg, which consisted of only Niki (who had spoken out against Schlatt). This shift in power led to The Manberg Rebellion.

During the announcement of the election results, Quackity made some offhand remarks claiming that the vote was rigged. Approximately 120,000 fraudulent votes were ultimately revealed to have been discarded from the election results, with the disqualified votes regarded as those originating from the same IP address. These votes were in favor of Coconut2020, leading to their competitors blaming Fundy for it. He didn't deny the accusations, suggesting that he was at least partially responsible for these rigged votes.[14] A few weeks later, Niki revealed to Tubbo that Fundy had indeed rigged the vote without her knowledge.

If one were to go off of the original rules of the election as stated by Wilbur, the Coconut2020 and Schlatt2020 campaigns legally wouldn't be eligible to participate, as they were declared on the night of the election, after the closing of the ballots. However, Wilbur decided to let the parties run after pressure from the attending audience. 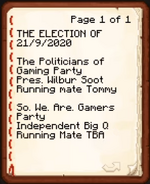 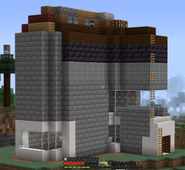