View source
watch 02:58
No Man's Sky Update - The Loop
Do you like this video?
Play Sound
Fiction notice:
All banter and fighting seen in streams/videos are purely fictional and should not be taken seriously. It is highly disrespectful to send hate towards anyone so please refrain from doing so at any point.

MICHAEL (was moved to Boo’s house for safety)

It's known as Project Dream Catcher because it's a deterrent for Dream. If Dream even lays a finger here, it's all gone. Everything.

Snowchester is a nation that was founded as a safe haven by Tubbo after the Doomsday War. The faction is in principle a commune which is governed by consensus decision-making, although Tubbo tends to hold power in dealing with foreign relations, being the person who declared independence. Tubbo later described it as an isolationist and militaristic colony. The faction declared its independence on January 21, 2021.[1] It is currently the largest faction with seven citizens (including two unofficial citizens) and one of the most powerful as well, due to their nuclear arsenal. On March 6, 2021, Tubbo claimed that he and Jack shared leadership of the armed forces of the faction.[Citation needed]

The Snowchester uniform includes a thick brown vest accompanied by a hood, boots, and pants, all lined with cream-colored fur. The vest goes over a long-sleeved, checkered, beige shirt.

Following the Doomsday War in L'Manberg, Tubbo was left with no place to live. He decided to go somewhere new with no government and wanted a place where he could hide from Technoblade and Philza. He eventually found a snowy biome near the ocean and named the territory "Snowchester." There, he started construction on his house. While building the house, Tommy met Tubbo and asked him to join in the quest to regain the discs. Tommy wanted Tubbo to move on from building villages, but Tubbo eventually returned to building the village.

On January 9, 2021, Tubbo and Ranboo attempted to fix Ranboo's long-term memory loss. Tubbo proposed the method of restoring Ranboo's memories by striking a block above his head with lightning. However, since thunderstorms don't occur in snow biomes, they resorted to using an anvil. The two then built a tower to the left of Tubbo's house, known as the Canon Castle. The experiment failed, possibly due to Ranboo's enderman half or due to him simply not being human.

Tubbo invited Jack Manifold to come and live with them in Snowchester since L'Manberg had been recently destroyed. Unbeknownst to Tubbo, Jack had secretly been working with Niki to get revenge on Tommy and Dream for ruining both of their lives. Jack initially refused, wanting to stay in Manifold Land, but Tubbo argued that it was now worthless because it was located on the ruined L'Manberg. Jack considered it, but still wanted to reclaim Manifold Land before learning of Tubbo and Tommy's plan to take down Dream and get the discs back. Jack then agreed to move in, believing that doing so could help him and Niki eliminate Dream before betraying the faction and killing Tommy. He then secretly reclaimed Manifold Land.

Project Dream Catcher became the true reason for the foundation of Snowchester. While Tubbo had made it look like Snowchester was simply a new, peaceful society, it was a cover to hide his nuclear missiles project, Project Dream Catcher. The intention of Project Dream Catcher was to create powerful nuclear warheads that would be capable of destroying vast amounts of land and entities within a very short amount of time, including Dream. Tubbo insisted that the nukes would only be used as a deterrent to keep players like Dream or Technoblade away from Snowchester, and to allow Snowchester to form its independence without interference.

It's known as Project Dream Catcher because it's a deterrent for Dream. If Dream even lays a finger here, it's all gone. Everything.[2]

—TUBBO, EXPLAINING THE PROJECT'S NAME TO RANBOO ON JANUARY 19

Tubbo also compared their plot to the real-life plot of the Manhattan Project, where the United States government worked to research and build nuclear warheads to end World War II.

The project was revealed on January 17, 2021, and the responsibility of Project Dream Catcher was given to Jack, who was afterward appropriately named as Minister of Science. The operation would have multiple structures constructed: the research lab, the control pads, and the launch pad.[3]

On January 21, 2021, Tubbo, Jack, and Foolish Gamers came together to declare Snowchester as an independent nation. They first built a platform as a location for doing official things. There, Tubbo wrote their independence declaration, titled "Independents." and helped design a flag for their new nation.[1] Shortly afterward, they built their official borders out of fences. Snowchester was the first nation to declare independence after Dream's imprisonment.

On January 26, 2021, Jack and Tubbo launched the first prototype missile that had been developed by project Dream Catcher. The server was given a ten minute warning before the missile was launched, although Jack delayed the process since he had planned to use the missile launch to murder Tommy with the help of Niki. The missile launch was successful, forming a crater that went all the way down to bedrock at the impact site. Jack and Niki's assassination attempt was unsuccessful however, with Niki and Tommy arriving at the detonation site 30 seconds late at the same time as Jack and Tubbo. After inspecting the crater with Tommy, Tubbo returned to Snowchester and met with Ranboo. He described to Ranboo the success of project Dream Catcher, then went on to explain that Snowchester would be decommissioning the two remaining nukes, as Dream was no longer a threat to the nation; also, using the missiles would bring too much undesired attention to Snowchester.[4]

Investigation from the Syndicate

On March 6, 2021, Tubbo encountered four members from a new organization: The Syndicate. The four investigators were Technoblade, Philza, Ranboo, and Niki.[5] Tubbo did not know about the Syndicate, and although he trusted Ranboo, he did not have the same feelings toward Techno, who had a large hand in destroying L'Manberg.

Currently, Snowchester is one of the weakest nations on the server due to the significant loss of citizens, the decommissioning of its Nuclear weapons, and Tubbo putting more of his efforts into his restaurant in Las Nevadas. 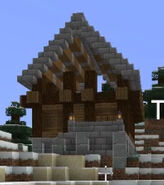 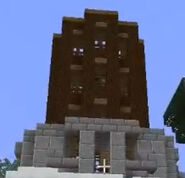 Dream's prized set of armor, known as Nightmare, in the Snowchester vault 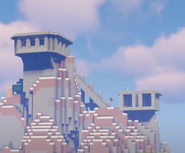