Dream Team Wiki
Register
Don't have an account?
Sign In
Advertisement
in: Pages with a spoiler warning, Tales from the SMP episodes

< Tales from the SMP
View source
watch 02:17
New Pokemon Games - The Loop
Do you like this video?
Play Sound
Spoiler warning:
The following page contains spoilers for the Tales from the SMP episode The Haunted Mansion.

The Haunted Mansion is the seventh installment of Tales from the SMP, and was streamed live on March 4, 2021 at 8 PM EST.[1] The episode starred Karl Jacobs, Ranboo, Punz, GeorgeNotFound, Technoblade, Sapnap, Dream, Tubbo, ConnorEatsPants, BadBoyHalo, and Jschlatt. The episode takes place in the future, and the theme is "haunted mansion". In addition, Karl tweeted photos of various buildings for the episode,[2][3] and revealed that the episode tied into the current Dream SMP and his character's lore the most.

Karl arrives at a house which Connor rented for a party with his other friends. After playing a game of Duck Duck Goose, the owner of the home, Glatt, arrives. He tells the group he owns multiple homes, which he rents out as AirBnB's, and is willing to let them stay at a property with a higher value as it is vacant at the moment. Glatt leads them to a mansion which he claims he rents out for a million dollars a day.

When they arrive in the main hall, Glatt takes Connor hostage and hides him away. To get Connor back the rest have to find three nether stars and place them in item frames in the main hall. Every nether star can be found at the end of a hallway. The group gets through these hallways, or trails, by completing parkour and various puzzles. Every time they find a nether star and place it in an item frame, Glatt takes people from the group. After the first nether star he takes Porkums, (Glatt also took Gump during the second trial,) after the second he takes Francis and Zachary, and after the third he takes Greg.

When the group puts in the third and final nether star a lever appears and the floor opens up to reveal Schlatt's lair, which also appears to be his tomb. They fall in a pool where everyone is sitting with a skull over their head, and the group presumes they are dead and freak out. However, Glatt and the others reveal that they were having a 'spa day' next to Glatt's grave. This angers Karl, and he leaves.

After a quick transition, Karl returned to the inbetween, and was shown running across the bridge towards the castle. A book was placed in the middle of the bridge, which Karl headed towards and read:

This is the inbetween.

A world you've been to a few times now.

Youre doing so well!

Sooner or later I truly believe you are going to uncover all you need to from here.

You probably have a lot of questions about things you see here, and I'd love to answer those :]

Karl placed the book back in the frame, and continued on into the castle, and up a flight of stairs into a bedroom. In front of the bed laid another book:

I think its time you start learning about this place!

This is the Inbetween's only bedroom. It is for our time travellers that find themselves sleepy after a long day of time travelling

This is specifically nice for the many Karls that come through here because they have many many great stories to tell the SMP!

He again placed the book back, and looked out the window seeing one of the turrets on the castle grounds. As he turned around to leave the bedroom, he noticed another book underneath the tree, titled with question marks, reading on page 1:

FIND A WAY INTO THE PORTAL

IT IS MORE IMPORTANT THAN YOU KNOW

He returned the book back, left the bedroom and headed up a flight of stairs. A cinematic shot showed a portal directly above Karl, and swept round the castle to rejoin Karls point of view as he headed outside to another flight of stairs and back inside towards the portal. The portal was blocked off to Karl by an iron gate, with a book in front of this gate reading "DONT STRAY FROM THE PATH" over and over again on a single page.

Up another flight of stairs, he returned outside to find another book at the centre of the balcony:

Hey Karl! Glad you found your way over here :]

Moving along explaining this place,

This is a hot place for time travellers to travel to!

It is wild, this place is so beautiful that even time travellers that can go anywhere at anytime ever and they still choose here! :]

Look at all of those time travellers down there, Karl! All of them choose to traverse these halls, uncovering mysteries and telling stories! How beautiful.

Continue on a bit more! I have more to share before you leave.

Karl placed the book back and looked over the edge of the balcony to find the courtyard with swings down below, and the many Karls walking around. He headed off the balcony and back the way he came to the bedroom, and back down the stairs from there. In the middle of the staircase at the bottom, there was another book, again, titled with question marks, and read on page 1:

GO UNDER THE TREE

YOU CANT AFFORD NOT TO

Karl walked down another flight of stairs and came across a library, but did not enter. Instead, he walked to the right, across a walkway and down a ladder, where in the corner of another walkway was another hidden book, titled with question marks and reading exactly the same as the previous book.

Down another 2 flights of stairs, Karl came across the birch tree he discovered the last time he was there, and looked towards the door at the bottom of the moat that surrounded the tree. This time, he dived in and went through the door, coming across a book in the middle of the room:

THANK GOD YOU FOUND IT. IT CANT SEE YOU DOWN HERE

Up a ladder to a second level, he found a second book, again in the middle of the room:

IT ISNT WHAT IT SEEMS.

YOU DONT WANT TO KNOW THE TRUTH ABOUT THOSE OTHER FORMS OF YOU.

THIS PLACE IS NOT OK.

FIND A WAY INTO THE PORTAL.

Karl placed the books back and headed out of these rooms inside the tree, and swam up to the surface. There appeared 14 separate books, all in a line right in front of the birch tree. He picked up the first one on the left, titled "JUST LISTEN" and on a single page repeated "JUST STICK TO THE PATH" over and over again. All the other books were exactly the same as the first.

Karl looked over the balcony, to the area in front of the whole castle and saw another book directly in the middle. He walked down another staircase, turned towards the castle and read it:

The inbetween is such a gorgeous place, isnt it?

So many beautiful mysteries to be solved.

What else can one ask for?

It is a time traveller's dream.

I can't wait to see you once again soon :]

I'm sure its going to continue to be great between you and I.

Good luck, you will be back in your Library. Please keep it safe until next time.

It is vital to keep these stories safe.

The SMP needs you, and you need me.

We make a good team! See you soon!

The camera panned out to show the castle in its entirety, before cutting to black. Within the credits, it repeated the line "The SMP needs you, and you need me! We make a great team! :]". 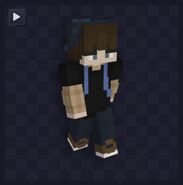 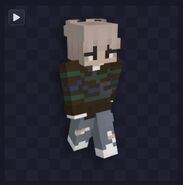 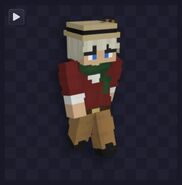