Dream Team Wiki
Register
Don't have an account?
Sign In
Advertisement
in: Pages with a spoiler warning, Tales from the SMP episodes

< Tales from the SMP
View source
watch 02:17
New Pokemon Games - The Loop
Do you like this video?
Play Sound
Spoiler warning:
The following page contains spoilers for the Tales from the SMP episode The Wild West.

"The Wild West" is the sixth installment of Tales from the SMP. The episode starred Karl Jacobs, BadBoyHalo, Corpse Husband, Technoblade, Tubbo, Ranboo, Quackity, Sapnap, Fundy, and ConnorEatsPants.[1][2] This story takes place in the past, presumably around the same time as The Masquerade.

Karl arrives at a bar that was being robbed by a group of Bandits, consisting of Jack Kanoff, Mason, and Connor. He confronted the Bandits on behalf of the owner, John John. The Bandits left after introducing themselves as "The Democrat Haters", for now, Karl resolved the issue. John was very grateful and offered Karl Beere, a supposed brand of beer, however Karl questioned why John was selling beer despite looking like a minor. John acted defensively and quickly changes the subject after.

Karl suggested that they gather the citizens of the town together to fight off the bandits, and John begins to lead him throughout the town. John first takes Karl to the bank, where Percy the banker confronted John about his debts. It was revealed that John had taken out a loan to run his saloon, and the two had a history of gambling together. Karl convinced Percy to join them and the group headed to their next stop.

The trio then met Sheriff Sherman Thompson (one week away from retiring), Crops (a prisoner and cannibal), Ron "Michael" Ronson (son of Ron, which is also the son of Ron), and finally clerk William Williamson. All three joined the group, though Crops was treated with suspicion. Notably, Michael accidentally killed Percy's "banking bee" with the fireworks he set off, causing Percy to become furious. Karl then suggested that the sheriff take them to the shooting range and teach them how to use their guns.

Sheriff Sherman taught the group to shoot their guns, taking turns to shoot at the targets. William, Crops, and Percy were revealed to be good (or "great") at shooting, something that Michael repeatedly remarked upon.

It became late, and the group gathered around a fireplace at the end of the town's street. They decided that there should be three fair one-on-one duels between three of them and the three bandits. The Sheriff volunteered for the first duel, Karl nominated John for the third, and the second was chosen by an audience vote, and turned out to be Crops.

The first duel started with Sheriff Sherman Thompson and Flint Michigan. The first ten paces were taken, the turn was quick, and the Sheriff landed his shot on Flint, earning him the win for the beginning match.

Before the second duel, Karl gave Crops a pep talk, gazing at the Church of Prime. Sheriff Thompson gave Crops his gun, Old Faithful, but Crops had never used one before, and it took too long to draw, so Crops used the gun he took from the target practice instead. Jack Kanoff decided to face Crops. He talked about the afterlife, and the duel began. Crops turns after six paces and killed Jack before he could react.

Mason decided to face the bartender for the third duel, unaware that John had already been chosen to fight. Karl gave John a pep talk, Mason taunted him, and the duel began. Karl counted ten paces, the pair turned, and fire. John John was killed. The townspeople expressed grief over the loss of John John.

Karl jumped to face Mason next, declaring that the town couldn't afford to lose any more people. Michael told him he looked funny as his parting words. The Sheriff counts down from ten, Karl turned to face Mason, and fired, killing him instantly. Crops grabbed his head and feasted on his corpse. Crops fled the scene, and the Sheriff neglected to chase him, since he was only one week from retirement.

Karl leads everyone else to the Church of Prime. He took to the altar and honored John's memory, dropping milk as a tribute, whilst Ron sets off a firework. Karl left the Church, shocking everyone by letting them know that he never intended to replace Thompson as Sheriff. They said their goodbyes, confused, and Karl went back to the mine where he arrived.

After a quick transition, a sweeping shot through the Inbetween castle took the viewer to Karl, where he stands on one of the balconies. He looks down towards a rose with a book framed underneath, before walking around to enter the castle. The camera continuously switched between Karl's point of view and a cinematic shot.

Before he entered from the balcony, a book laid on a block at the entrance, which Karl picked up and read:

This is the inbetween.

A world you've been to a few times now.

You're starting to connect the pieces, little by little. You may not even know that yet but it'll be apparent for you soon.

There is so much to the inbetween you need to explore. I implore you to continue on.

Karl walked through the castle and down a flight of stairs where he comes across another version of himself, in his completely white Inbetween skin. Karl followed this version into the courtyard, where many more versions of himself could be seen wandering around. In front of the swings and the tree in the courtyard laid another book:

As you are aware you've been here many times now. Its like your home away from home.

You'll see that if you don't figure out what about this world is harming your memory, you'll start to be wary of others, even your closest friends.

Which is why you absolutely need to continue to search this castle. The inbetween is a gateway for you that you may be able to tap into for the better.

Karl placed the book back, and headed out of the courtyard to look around. As he headed through a corridor, he waved at another version of him, but the version just carried on walking straight through Karl, before Karl carried on walking, across an outside walkway, and into a pool room.

From there he headed outside and saw the book that he first saw from the balcony, the sun setting through the opening in the garden. He took the book and read it through:

This is a beautiful castle. I think it is unlikely you'll ever be able to traverse the whole thing within one visit. Unfortunately, that means there will always be secrets left undiscovered.

The castle is dynamic. It is alive similar to you or me, constantly changing and growing and adapting This is not a bad thing, if anything, it will help you find a way to stop this harm being done to you.

Karl placed the book back, and headed back into the castle the way he came, through the pool room. In the outside walkway, he came across an opening in the wall behind one of the fire lit lanterns, finding a book titled with question marks:

LOOK UNDER THE TREE

He placed the book back again and looked towards a nearby tree in the walkway, but with nothing there. He went back inside up a flight of stairs to the main room of the castle, with another book and a dead rose in the middle of the room:

Stories like todays can show that not everything necessarily has to end in misery. Stories can all be happy and cheery, and stories can be miserable, but this doesn't make any one tale more important than the other.

I think it is time for you to get to see a bit more of what the castle looks like, continue on and discover all of its beauty.

Karl continued on through the main hall and out the other side, where he found another tree out in the open. He looked down into the water underneath the tree and saw a door within the floor of the water, but didn't go and investigate. Instead, he found a book at the tree roots, which repeated the phrase "DON'T STRAY FROM THE PATH" over and over again on the first of 87 pages. He put the book back, and headed down a path leading him to the front of the castle grounds, where there laid another book and rose directly in the center of the front garden:

This is the end for today. You may not think you have gotten closer to the end result I know you desperately crave, but you have.

I know you don't want to lose your friends, I don't want you to either.

Do not tell anyone about the inbetween.

This will be the last time you travel back to your original library, but it may look a little different this time around.

Make sure you preserve its stories. It is essential.

I can guarantee if you explore this castle enough, you will one day know what to do to stop losing yourself and have a better control over your mind.

With that, Karl walked to the very edge of the front area, as the cinematic camera pans out to show the full extent of the castle, sitting on a floating island all of its own, before cutting to black. The viewers didn't see him return to the library in person. The credits repeated a page from the final book: "I know you don't want to lose your friends, I don't want you to either." 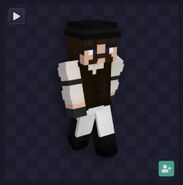 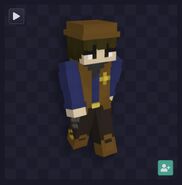 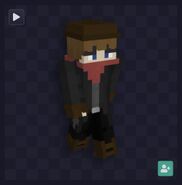 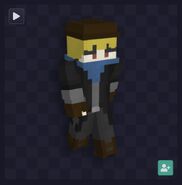 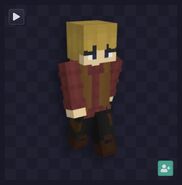 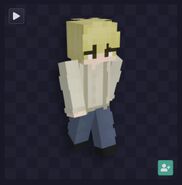 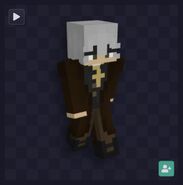