View source
watch 02:58
No Man's Sky Update - The Loop
Do you like this video?
Play Sound

This page is about the content creator. For their SMP character, see Technoblade/SMP.

Alexander "Alex", better known online as Technoblade and most commonly known as Techno, was a Minecraft YouTuber and friend of the Dream Team. There was a running rivalry joke between him and Dream, as they both often competed against each other in competitions. Techno logged on to the Dream SMP for the first time on September 22, 2020. On June 30, 2022, his family released a video announcing that he had passed away due to cancer.[7]

Techno posted on his Twitter account that after his Potato War with im_a_squid_kid, he would start a “training arc” to beat Dream in their next matchup, the $100,000 Dream vs Technoblade Duel, hosted by MrBeast.[8] Techno won the match, beating Dream 6-4, although they agreed to split the money. Technoblade uploaded his perspective Dream VS Technoblade: $100,000 Duel ANALYSIS.

On August 27, 2021, Technoblade posted a video to YouTube titled "where I've been". In the video, he explained that he wasn't uploading content to his channel at much due to a struggle with cancer.[9] On December 23, 2021, Techno posted another video titled "I Almost Became An Amputee" where he gave an update on the state of his cancer.[10] After a continued uphill battle against the disease, Techno passed away from his cancer at some point in 2022. On June 30, Techno's father posted a video titled "so long nerds" on Techno's YouTube channel announcing that Techno had passed away.[7]

To see their history and involvement in the SMP, visit Technoblade/SMP.

Sherman Thompson (Tales from the SMP)

Porkums (Tales from the SMP)

Porkius VII (Tales from the SMP) 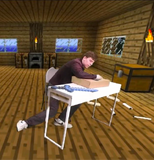