View source
watch 02:34
Fire Emblem Warriors: Three Hopes - The Loop
Do you like this video?
Play Sound
Spoiler warning:
The following page contains spoilers for the plot of the Dream SMP.

Fiction notice:
All banter and fighting seen in streams/videos are purely fictional and should not be taken seriously. It is highly disrespectful to send hate towards anyone so please refrain from doing so at any point.

—THE MOTTO OF THE SYNDICATE, MEANING "THUS ALWAYS TO TYRANTS" IN LATIN.

The Syndicate is an underground organization started by Technoblade and Philza on January 18, 2021.[1][2] Members of the Syndicate promote anarchy and wish to diminish tyranny in all its forms. The Syndicate's base is located in the arctic north near the homes of Technoblade, Philza, and Ranboo. Its meeting room is in a stronghold and features immovable end portal frames, although the members of the Syndicate are unaware of their true nature (though Ranboo has some suspicions), and use it as their meeting table.

Each member of The Syndicate is expected to choose a codename for themselves. As a callback to the end of the Manberg vs Pogtopia War and Techno's speech on Theseus, the codenames generally are characters from Greek mythology.

Technoblade was tasked with finding members for their new faction. He began searching the ruins of L'Manberg when he received a message from Niki, inviting him to her city as she had heard he wanted to talk.[15] Upon meeting, the two spoke about anarchy, and Technoblade talked about how impressed he was because she burned L'Mantree. Niki said that the offer to join him in anarchy was tempting, but declined his offer because her goals were currently different from anarchist ideals.[16] Technoblade left her and said that he wasn't going to ask people for a while, as he thought Niki would be great and that he probably couldn't convince anyone else if he couldn't convince her.

The first meeting was held on March 6, 2021, and was attended by Technoblade, Philza, Ranboo, and Niki.[17] During this meeting, Philza revealed the meeting room and its features like the meeting table (made out of an end portal that cannot be activated), the secret entrances and exits, the qualities of the room, and the ender pearl stasis chambers. The meeting room is located in the stronghold under the ocean near Technoblade, Philza, and Ranboo's bases. They discussed the following:

On June 1, 2021, the members of the Syndicate met up at Technoblade's cabin to celebrate his birthday. They set off a few fireworks, joked around, and ate some cake.[22] Philza then decided to tell the members about Wilbur's revival which surprised both Techno and Niki, as well as upsetting the latter. The four of them talked about how Schlatt's return would be even worse. They also brought up Ghostbur, which caused Niki to freak out, but the others managed to calm her down. They then started to talk about the new risks of governments popping up.[23]

Whilst Technoblade left to talk to Quackity, Phil told Ranboo about "her," a woman that allegedly helped grow a forest that had recently sprouted near the cabin, although the contents of this conversation are unknown.[24] When Techno returned to the others, the group continued celebrating his birthday. Phil then showed the other Syndicate members the training area under the cabin. After Phil asked who Techno spoke to, Techno briefly talked about it, although he didn't mention who he talked to or what they were talking about in great detail. Most of them didn't persist, although Niki asked if it was Wilbur because the person "sounded like someone with empty promises." The members then decided to just party and forget about it for the time being.[25]

Niki started to distrust the members of the Syndicate for not telling her of Ghostbur or of Wilbur's potential revival sooner. She wondered if everything she had done with them had been for nothing because now Wilbur would retake the spotlight and manipulate her again.[26]

On November 28, 2021, Technoblade gathered the members of the Syndicate that were not imprisoned. Philza and Niki showed up to the meeting, and Techno discussed the plans to break Dream out of Pandora's Vault and how Sam had imprisoned Ranboo. With the development of Ranboo being imprisoned, the rest of the Syndicate joined Technoblade in his plan to break Dream and Ranboo out of Pandora's Vault. During the meeting, Techno also discovered his dog at this meeting and named it Apollo, recruiting Apollo into the Syndicate.[27]

After the other members of the Syndicate agreed to join in on the jailbreak, the group discussed the plans and roles of each member while gathering supplies and navigating towards the prison. Techno would break into the prison with Apollo by his side, and Niki and Phil would stay outside to create a distraction and activate Techno's ender pearl stasis chamber if he was unable to escape. Since Niki did not reveal her membership to the Syndicate and affiliation with the anarchists to outsiders, she could talk and mislead the crowd while also secretly spawning withers nearby.[28]

Techno succeeded in breaking Dream and Ranboo out. Connor, who was imprisoned for "stolen valor," was also broken out at the same time. However, the Syndicate also faced some issues during the jailbreak and escape. Apollo was killed by Sam while breaking Ranboo and Connor out, and Sapnap saw Niki spawn withers during the chaos. Ranboo was also killed by Sam during the escape and lost his final canon life during the group's escape. Nonetheless, the Syndicate and Dream managed to regroup at Technoblade's cabin without any other losses.[29]

After the Syndicate and Dream reconvened at Technoblade's cabin, Dream gave the netherite supplies back to Technoblade and left. Connor, now with the Syndicate, agreed to join the anarchist organization after Techno offered him the chance. Connor began building his new house with dirt in the mountains near Techno's cabin.[30]

During an argument between Niki and Jack, Niki accidentally revealed the Syndicate to him. When he left, Jack pondered about the Syndicate and his relationship with Niki, but showed no hatred towards them and merely wondered if it was what Niki needed in her current position.[31]

On April 15, 2022, CaptainPuffy left a book at Techno's house asking to join the Syndicate before leaving for the new world. In the book, Puffy explained that while everyone had their own agenda and could not be trusted, Techno was the most trustworthy due to his honesty.[32]

Technoblade wrote and signed a manifesto during the creation of the Syndicate;[33] copies of a copy (done to prevent cloning of books) are distributed to each member, who is expected to keep it secret. It reads:

This Syndicate is formed to serve as a network for fellow Anarchists to meet, exchange information and cooperate in the mutual pursuit of Anarchy and the fight against Tyranny.

We shall have no Leader; no Member shall be compelled to act against their will.

No Member shall reveal information about the Syndicate to outsiders.

Technoblade shall serve as the Recruiter to induce new Members into the Syndicate with Approval from a majority of Members. 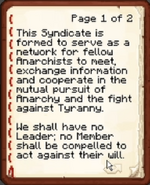