Dream Team Wiki
Register
Don't have an account?
Sign In
Advertisement
in: Articles in need of citation, Friends, SMP members,
and 3 more
English

This page is about the content creator. For their SMP character, see TommyInnit/SMP

Thomas "Tom" Simons[5][6], better known online as TommyInnit or Tommy, is a popular British Minecraft YouTuber and Twitch streamer. He has a distinct obnoxious but funny persona, and rose to fame with his humor. He worships Vikkstar jokingly and admires Jschlatt; some of his videos are inspired by Schlatt's. He became friends with the Dream Team during the summer of 2020 and has joked about becoming one of its members and renaming it "Tommy & Friends"; however, he is part of the Sleepy Bois Inc. with Technoblade, Wilbur Soot, and Ph1LzA. He also went to school with Eryn.

Tommy is often called the main character of the Dream SMP for his participation in (and sometimes for starting) major plot points, and for driving the story forward. Since joining, he has also helped expand the server by recommending new members.

Tommy started streaming on Twitch at the age of 13 and averaged five to thirty viewers. He often streamed minigames on the popular Minecraft server Hypixel. One day, he raided fellow streamer Tubbo who had 0 viewers.[7] The two became good friends and began playing Hypixel together, often Skyblock.

About a year into his streaming career, Tommy started uploading on his YouTube channel, TommyInnit. His channel gained traction due to videos such as "Every Hypixel YouTuber Ever," and he surpassed 5,000 subscribers soon after.

Tommy also participated in the Minecraft Championship, with his debut being MCC2. In MCC4, he teamed with Technoblade, Wilbur Soot, and Ph1LzA , who were known as the "Sleepy Bois Inc." In MCC9 on September 12, 2020, as part of a deal with Wilbur, Tommy became an official member of the Sleepy Bois.[8]

Prior to SMP Earth, Tommy had been a SootHouse fan. When fellow British YouTuber and streamer Wilbur Soot, who edited for SootHouse, announced that he was starting "SMP Earth," Tommy was eager to join. After making videos with popular YouTubers, like TimeDeo, and earning "YouTube Rank" on Hypixel, Tommy messaged Wilbur on Twitter. Wilbur responded that if Tommy could get more viewers while streaming, he would be added to the SMP. Tommy cleverly streamed on YouTube rather than Twitch, as he would get more viewers on YouTube, and Wilbur invited him to the server. Tommy ended his YouTube stream after receiving the invitation and went live on Twitch shortly after to play on SMP Earth. On SMP Earth, Tommy created the country "Business Bay" and talked to Wilbur and many other popular Minecraft YouTubers, such as Technoblade and CaptainSparklez, for the first time. He also started many wars, most memorably "The Battle of the Bridges." As a result, he gained popularity and shot from 10,000 subscribers to 100,000. He also became friends with Technoblade, Wilbur, Ph1LzA, FitMC, and many others.

After SMP Earth lost popularity and closed, Tommy returned to streaming Hypixel Skyblock. His Twitch and YouTube continued gaining traction, propelling him to an average of 4,000 Twitch viewers and 175,000 YouTube subscribers. He experimented with other content, including Discord content, YouTube reactions, and cursed Minecraft videos, while still playing Skyblock with Technoblade and TimeDeo. He started competing in MCC as well. His MCC4 win with Technoblade, Wilbur, and Ph1LzA gained around 935,000 views.

Eventually, Tommy began creating videos with his close friend Tubbo. This included popular videos about hacking in Minecraft, which launched Tommy to nearly 250,000 subscribers. He then started making videos from Twitch streams, such as "story time" videos about how he met famous YouTubers, how his school found out about his YouTube channel, and how he was once banned on Hypixel. He also made a video on the infamous Minecraft server 2b2t.org, which is notorious for hacking and griefing. Around this time, Dream noticed Tommy's content, and the two began to chat regularly on Discord. Tommy continued making videos, with a video about using auto-clicker in 1v1s against popular YouTubers (including Dream) amassing over 800,000 views and pushing him past 260,000 subscribers. Afterwards, Tommy and Tubbo made a video on the server Wynncraft, which Tubbo called a "1000-dollar Minecraft server" for how well-made it was. The owner of the server noticed the video and invited the two of them backstage to see how the server was run.

Tommy's videos continued to perform well. He made a video with an auto-clicker mouse from his school friend Eryn (known online as Cyberonix) that became his first video to reach a million views. He made a video with fellow Minecraft YouTuber Fundy, who had also recently blown up on YouTube, where they trolled Tommy's friend Bitzel. Tommy also streamed on Twitch with Dream Team member Sapnap, a stream he dubbed "Minecraft Speedrunner vs B*tch" with Tommy as the speedrunner and Sapnap as the hunter.

Tommy was then invited to the Dream SMP.

To see their history and involvement in the SMP, visit TommyInnit/SMP. 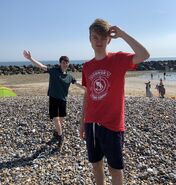 Tommy and Tubbo meet up

Tommy with Wilbur Soot and Philza 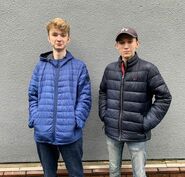 Tommy and Jack Manifold meet up 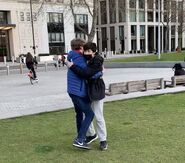 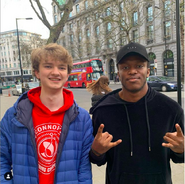 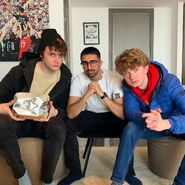 Tommy and GeorgeNotFound stuck in a net

Tommy meeting up with Wilbur Soot and Philza

Tommy meeting up with Ranboo

Tommy with his diamond play button