Near the Guardian XP farm

Tubbo’s jungle base was Tubbo’s base of operations and home during the Dream Team SMP vs. L'Manberg War and remained so until Ponk griefed it as revenge for Tubbo killing Bebbles, his chicken.

Tubbo first constructed his jungle base due to Dream killing all of his villagers and halting the construction of his iron farm in his original house. He built this base far away from spawn so he could have a villager farm without anyone else being able to use it. He had Fundy construct a redstone note block song under the base. The song was the Able Sisters theme, and TommyInnit was impressed by it. There was a grand hall with four subsections. Each subsection of the base had a letter above it symbolizing what was meant to go there.

Tubbo transported villagers from a nearby village to start a breeding farm. This came in handy in the war effort against the Dream SMP, as Tubbo gained enough emeralds to get full netherite for everyone in L'Manberg. He also brewed many drugs (potions) during this time for the war effort. He and Eret spent the entire night before the final battle of the war preparing armor, weapons, and potions for the L'Manbergians to use in battle. During that final night, Dream arrived at the base and stopped the breeding farm, stating that Tubbo could only use naturally spawned villagers. Tubbo was able to keep most of the villagers he had locked in a job since they had been naturally spawned in. Sapnap stole all of Tubbo's emeralds later that night while he was offline. He almost killed the villagers as well, but his chat urged him not to do so and he begrudgingly obliged. The next day, Dream, Sapnap, and George stormed the base, killing Tubbo several times. Tubbo then scrambled to bank everything important in an ender chest before breaking his bed and returning to spawn. He used this upper hand to delay them for a short period.

After the war, he expanded his base and made some TNT dupers a couple hundred blocks away from the base. He also made a fountain in his base as well as an automated bamboo farm. Before he could continue building it any further, however, Ponk griefed the base because Tubbo had killed Bebbles, his chicken. However, the grief was not too bad as a lot of the base was made of inflammable blocks, and over half of the villagers were left alive. After the grief, Tubbo seemed to forget this base existed and moved on with his life.

Now, people in search of villagers are led by their chats there every once in a while, as the villagers that are still alive have decent trades such as name tags. They find a base that was once cared for but probably is nothing more than a historic battle site at this point. 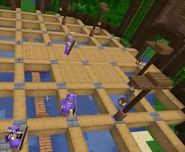 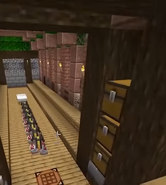